Israel’s new plan is to ‘shrink,’ not solve, the Palestinian conflict. Here’s what that looks like

In Goodman's telling, the older approaches by the Israeli left and right only put forward ideologically pure ideas about how to end the conflict with the Palestinians. This is a "false dichotomy," he adds, that led to paralysis and the perpetuation of the status quo in the occupied West Bank

“There have been a lot of errors in the pandemic and it’s cost human lives.” As the coronavirus pandemic spread throughout the population, hospitals...
Opširnije
Facebook
Twitter
Pinterest
WhatsApp
Telegram
Viber

Tel Aviv (CNN)The new Israeli government that toppled long-serving Prime Minister Benjamin Netanyahu this summer is full of contradictions. There’s pro-peace leftists, pro-settlement right-wingers, pragmatic centrists and even for the first time an Arab Islamist party, all sitting together in one governing coalition. On the most divisive issue — the Israeli-Palestinian conflict — there is almost no consensus, which is just how Micah Goodman likes it.

Goodman, a political philosopher, has rocketed to public prominence in Israel and beyond for his contrarian thesis on how not to solve the long-running conflict.
Many have taken to calling him the court philosopher of Prime Minister Naftali Bennett, an ultra-nationalist former settlement leader, who has publicly embraced Goodman’s paradigm of “shrinking the conflict.” But other centrist and leftist ministers have also come calling. Even the Biden administration has seemingly taken on what Goodman calls his pragmatic and less ideological approach. While the White House remains committed to a two-state solution, Secretary of State Antony Blinken said in May that the immediate priority was to “rebuild some trust” between Israelis and Palestinians. 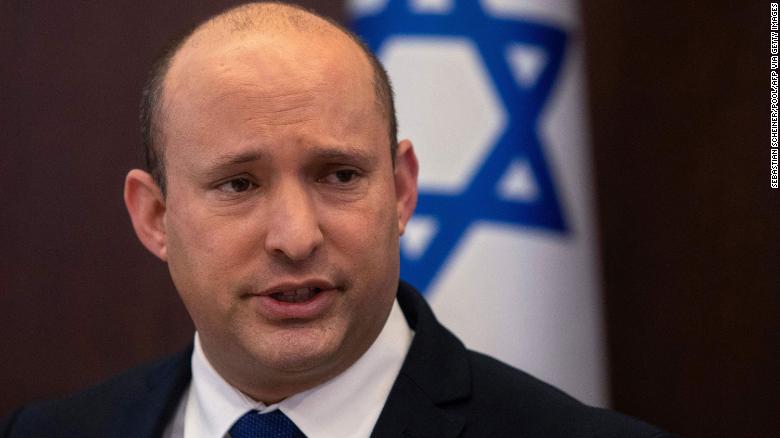 Naftali Bennett, Israel’s new prime minister, is a former tech entrepreneur.
Goodman himself is bemused by all the newfound interest from politicians, diplomats and generals. Earlier in his career he wrote books analyzing ancient Jewish texts, which he says was exactly the right training for tackling an issue as contentious as the Israeli-Palestinian conflict.
“The foundational idea of the Talmud is to always listen to two sides of the argument,” Goodman tells CNN. “The Talmud admires people who ask ‘why are we wrong?’ Thinking only one side, or only your side, is correct is anti-intellectual.”
Goodman deployed this approach in his 2017 book, “Catch-67: The Left, the Right, and the Legacy of the Six-Day War,” which wrestled with the internal Israeli debate about the conflict with the Palestinians and the fate of the territory Israel captured during the 1967 war.
“I showed both sides’ argument, just like in the Talmud: If Israel stays in the territories [like the right wants] it threatens its future as a Jewish and democratic state. If it leaves the territories [like the left wants] it threatens its future due to security concerns.”
The book, Goodman says, “caught fire,” becoming a surprise bestseller in Israel that was quickly translated into English.
In Goodman’s telling, the older approaches by the Israeli left and right only put forward ideologically pure ideas about how to end the conflict with the Palestinians. This is a “false dichotomy,” he adds, that led to paralysis and the perpetuation of the status quo in the occupied West Bank. According to Goodman — who himself lives in a West Bank settlement, although he describes that as irrelevant to his work — the left wants an immediate end to the military occupation of the territory, while the right wants to continue Israeli settlement construction and the simple “management” of the conflict in perpetuity. 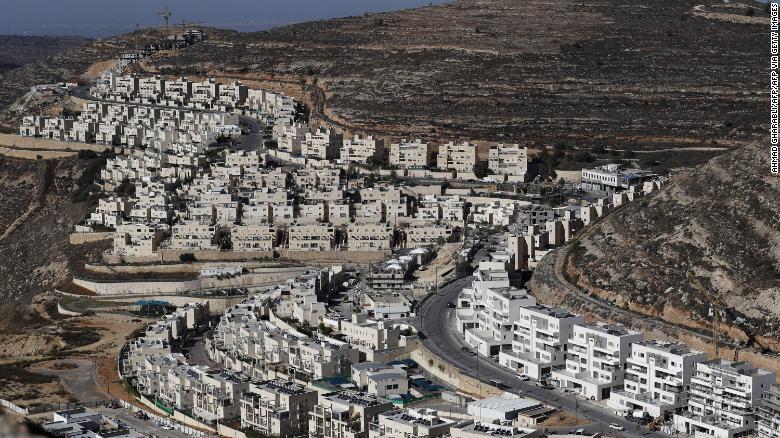 A view of the Israeli settlement of Givat Zeev, near the West Bank city of Ramallah, last November.
“We can make things much better [in the West Bank] even if it doesn’t end the conflict,” Goodman said — hence “shrinking” the conflict. Goodman focuses solely on the West Bank in his analysis and leaves out the thornier issue of the Gaza Strip, which Israel unilaterally withdrew from in 2005 — and has fought four wars since against the Hamas militant group that controls it. “It’s a much more complicated situation there,” he said sadly.
“We need to quantify the conflict and decrease the quantity of the conflict — this is the paradigm shift,” Goodman adds. “Look at the Covid-19 pandemic: We’re no longer talking about ‘Zero Covid,’ we’re talking about a certain level of Covid, of ‘shrinking Covid’ so it doesn’t collapse the health system.”
In practical terms, Goodman’s approach entails a host of steps Israel can take to improve Palestinian economic life, security and self-governance in the West Bank. They range from more conservative moves — such as increasing Palestinian work permits inside Israel and improving Palestinian trade access or building roads and bridges that bolster the territorial contiguity between Palestinian cities — to more domestically controversial measures, such as freezing settlement building outside of the main Israeli West Bank population centers and granting Palestinians more land for their own construction.
In recent weeks, Israel has begun adopting some of these measures, including issuing 15,000 new work permits inside Israel for Palestinians, floating the Palestinian Authority a $500 million loan, re-establishing Joint Economic Committees to discuss future projects, allowing reunification (i.e. legal status) for Palestinian spouses in the West Bank, and tentatively approving 2,000 new housing units for Palestinians in the part of the West Bank under full Israeli control. 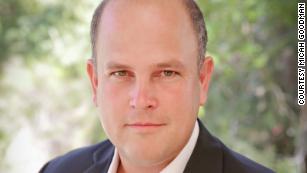 Israeli political philospher and author Micah Goodman has the ear of Prime Minister Naftali Bennett.
As one senior Israeli official told CNN last week, echoing Goodman: “We have to make every effort to shrink the conflict and start shaping the solution, beginning with infrastructure and economics.”
Yet the more far-reaching measures outlined above are extremely unlikely given the make-up of the current Israeli coalition. This doesn’t deter Goodman, however — in his mind it only bolsters his thesis.
“There is no consensus in the government about the end game, but they can agree about the game. This is this government’s entire approach on all issues,” Goodman says. “The important thing is to agree on the action, not on the narrative surrounding it.”
For Goodman, “shrinking the conflict” can readily fit into a left-wing narrative about a two-state solution, since most of the proposed initiatives can be viewed as important steps on the road to building a Palestinian state. Right-wingers, Goodman asserts, can feel the same, since the approach — for now — only bolsters Palestinian autonomy and doesn’t imply statehood or preclude Israel from annexing the rest of the West Bank, as Bennett has argued for years.
Goodman’s critics from both the right and the left aren’t as sanguine.
For the right, the steps Goodman is promoting likely run a higher security risk than he appreciates, and in any case miss the larger point.
“This conflict is not due to ‘friction’ between Israelis and Palestinians. It was there before and it’ll be there after, even if the left makes us leave [the West Bank],” says Ran Baratz, a public diplomacy director for former Prime Minister Netanyahu. “You think you’re shrinking the conflict, but for the other [Palestinian] side it’s just a lull between wars where they’re improving their position.”
The left, at best, doesn’t see much new in Goodman’s thesis and at worst is suspicious that “shrinking the conflict” is the same approach adopted in the past by the Israeli right — “managing the conflict” or “economic peace” — only rebranded. 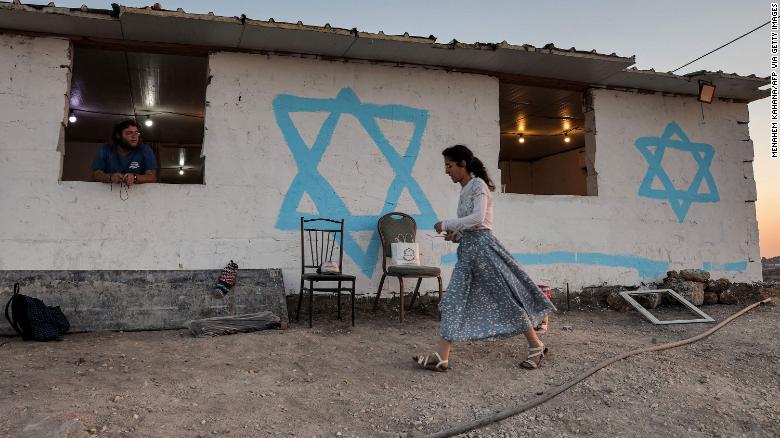 A young woman walks past a simple housing unit in the settlement of Givat Evyatar, West Bank, on July 1.
According to Dahlia Scheindlin, a political analyst at the Century Foundation think tank, Goodman’s approach appears to “perpetuate the paradigm of Israel giveth and Israel taketh away, and it’s unclear if it’s sincere regarding genuine Palestinian self-determination.” The new Israeli government, she adds, “latched onto a slogan, but I don’t know what content behind the slogan they’re actually going to implement and what their intention is behind it.”
Palestinians appear bemused by this wholly Israeli debate about what is fundamentally their future too.
“It’s nice that Goodman is analyzing what can bring 80% of Israelis to consensus about the conflict, but can this issue be resolved if only one side agrees? I doubt it,” says Samer Sinijwali, an activist and internal dissident from the ruling Palestinian Fatah party. “I’d prefer if one Israeli and one Palestinian talked about what 80% of Israelis and Palestinians can agree on.”
Goodman, for his part, argues that increasing Palestinian self-governance is a good unto itself that will only improve Palestinian lives and increase Israel’s options in future. After all, he says, the old approaches haven’t delivered.
“We won’t get to peace through big diplomatic pushes, it’ll only be through small steps until the Palestinians achieve a critical mass of self-governance. At that point the positions of many Israelis and Palestinians will likely change. Right now our imagination is so limited.”
SourceCNN
Share
Facebook
Twitter
Pinterest
WhatsApp
Telegram
Viber
Prethodni članakOn the trail of fake medicine smugglers in Benin
Naredni članakBritain will help Australia build nuclear-powered submarines to counter China’s military prowess

Abstract Does our history only appear overheated, while it is essentially calmly predetermined? Is it directional or conceivable, dialectic and eclectic or cyclical, and therefore...
Opširnije
Politics

Old man in a hurry: Biden must act quickly to save his presidency

Is Joe Biden failing? Less than nine months into his presidency, rising numbers of Americans and not a few foreign allies appear to think...
Opširnije

Abstract Does our history only appear overheated, while it is essentially calmly predetermined? Is it directional or conceivable, dialectic and eclectic or cyclical, and therefore...
Opširnije
Health

Child (12) dies two days after corona vaccination in Germany: According to experts, connection is likely

In northern Germany, a child dies two days after a corona vaccination. A connection has not been proven. Forensic doctors think it is likely. The...
Opširnije
(un)real

Blackmail to Israeli citizens: Without a third dose they don’t give you a green pass

On Sunday, many Israelis lose their Corona certificate – the green passport, which confirms that they are adequately vaccinated. A new certificate is tied...
Opširnije

BOSNIA PRESS is an independent political magazine. This website is intended for information, entertainment and education.

2010. © Owned by BOSNIA PRESS. All rights reserved. Content from BOSNIA PRESS may be copied and transmitted, with the obligatory indication of the source and author, with a link to the source.

This will close in 35 seconds